The Future of ice making – Top 10 reasons for REALice 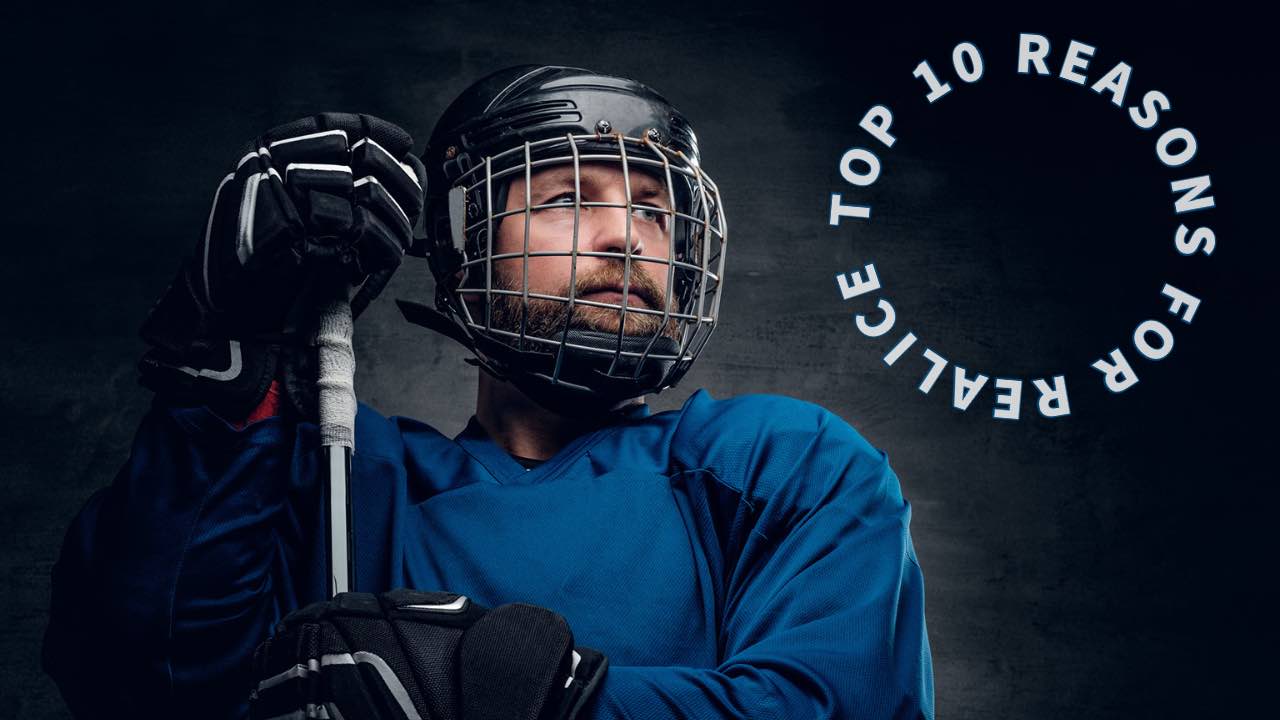 What does the future of ice making look like?

Ice makers have been using extremely hot water to maintain the ice — a practice that’s been going on for half a century, or more. The hot floodwater that’s poured into the ice resurfacing machine, at temperatures as high as 60°C (140°F), delivers a sheet of ice that isn’t fragile because it contains fewer air bubbles compared to cold water straight from the tap. Those air bubbles, if left in the water, create ice that is fragile and creates a lot of snowmaking it hard to skate — and hard to keep the puck flat, especially in the dying moments of the 3rd period.

The capacity of a typical ice resurfacing machine’s floodwater tank is about 5 times bigger than your bathtub at home. Heating that amount of water each time an “ice make” or “flood” is done, can require thousands of liters of hot water each day — all depending on how many ice makes are needed. If you have more user groups using the ice, more floods will need to be done. Busy arenas can see as many as 15 ice makes a day – even more. That’s a lot of hot water! And it all can be eliminated with the REALice technology and that’s why REALice is the future of ice making.

The REALice technology is the future of ice making. Here are our top ten reasons why!

1.) Reduces your arena’s footprint by 13% with one simple retrofit

How do we get our ice rinks on the path to net-zero? And what systems in a rink are the biggest contributors to carbon emissions? The Mayors’ Megawatt Challenge (MMC) presented its roadmap findings from a 9-rink pilot in the Greater Toronto Area at the end of 2021. Surprisingly, of all the moving parts that are required to keep good ice in these large refrigerated boxes, resurfacing accounts for 17% of the total CO2 emissions. And of that 17%, 13% can be avoided with REALice by eliminating the need for hot water to resurface the ice.

Installing a cold water resurfacing system was specifically identified in this study as a high impact measure by the MMC, saving, on average, 21.7 tCO2e. That’s a very compelling number for such a simple retrofit — and a big reason why every ice arena should be making the switch away from hot floodwater resurfacing now.

Learn more on how to get your arena to net-zero 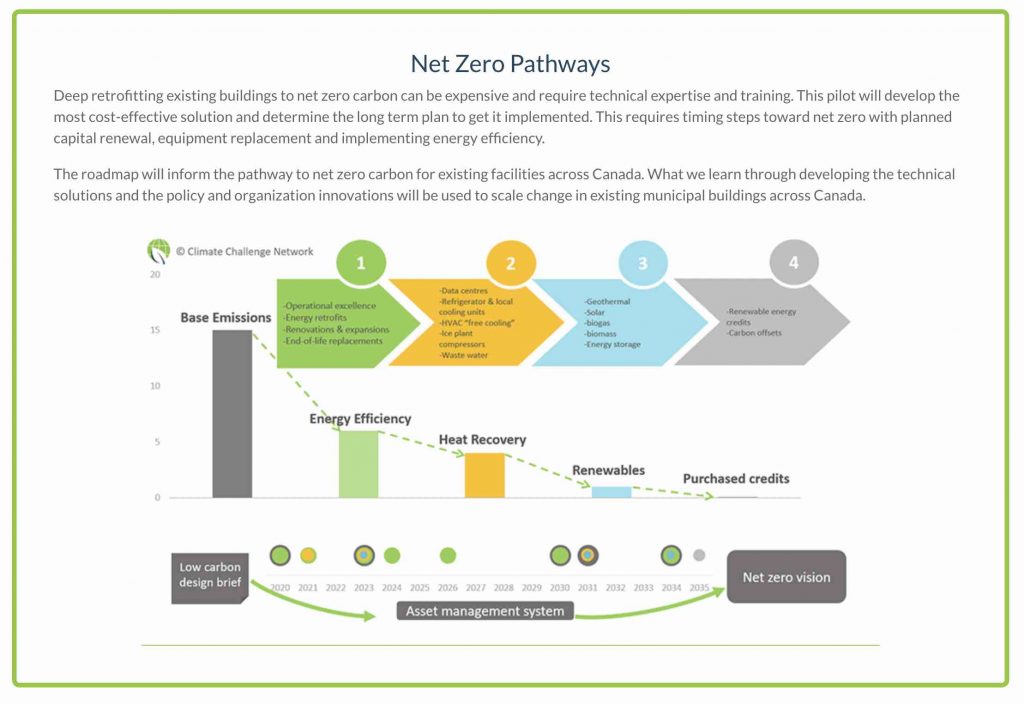 The FortisBC study from 2014 showed a clear picture. Like the PNE in Vancouver in the picture below, the 10 participating ice rinks were able to save on average 330 GJ of natural gas per year plus the electricity savings – without compromising the quality of the ice. Read the report 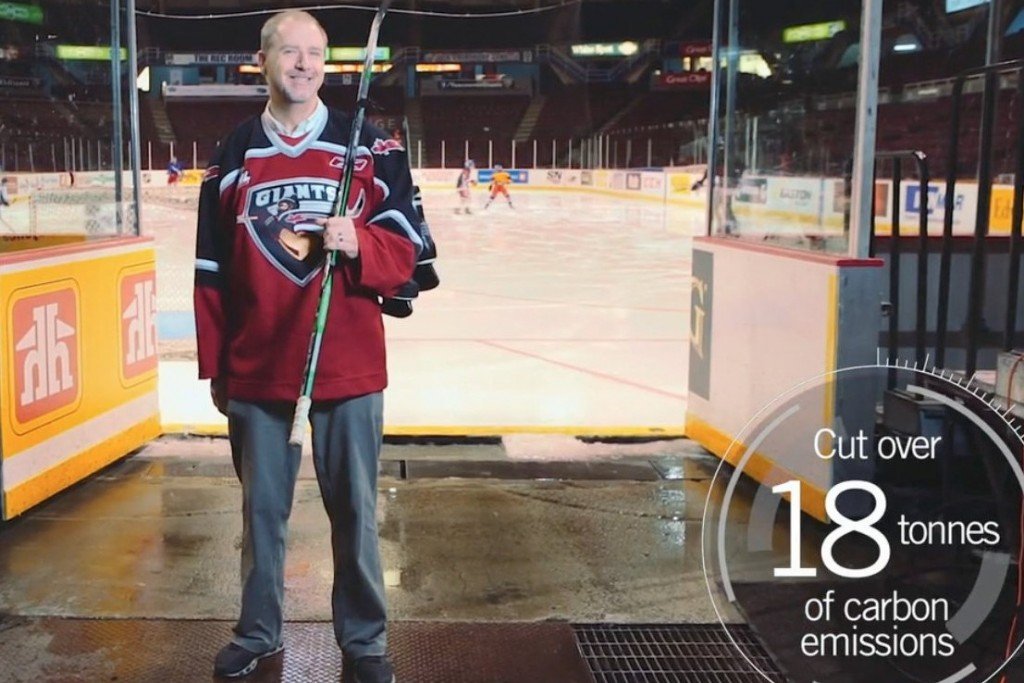 When that hot floodwater is put on the ice, the refrigeration plant, powered by electricity, kicks in to remove that heat from the ice, getting it to freeze. That process is done with brine/glycol lines in the concrete slab that are set to particular freezing temperatures. Those temperatures, as well as the floodwater temperature, the thickness of the ice, and the ambient temperature in the arena –, are all contributing to how quickly the floodwater will freeze, and how long the ice plant will run. And that’s not all. Because the REALice-treated water is denser, the brine/glycol needs to be reset by 3°F – 5°F warmer. This means the combined electricity savings can account for up to 10% – 12%.

Watch Greg Mitchell, Arena Coordinator in Kitimat, BC, explain how they are now running their brine at 21°F. That’s at least 3°F higher than what it was with hot water floods. 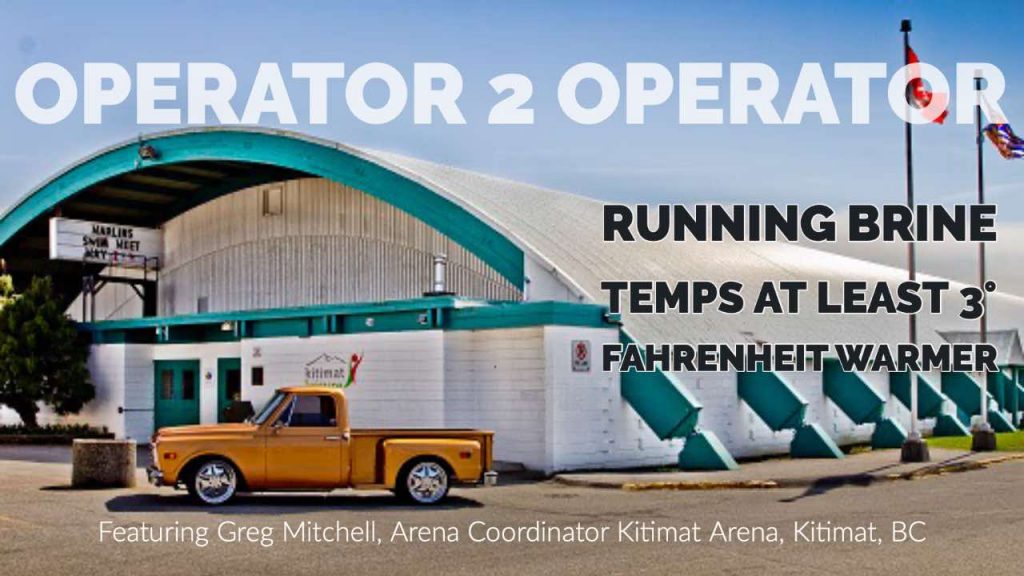 4.) Gets ice that plays faster, and helps the puck stay flat

The ice made with REALice will be at least as good as ice made with hot water — but those higher brine resets (slab or infrared) will need to be made.

At the brand new arena in Upper Skeena Recreation Centre in Hazelton, BC the brine is running between 21 to 22°F, says General Manager Clarey Martin, a long-standing ice maker with over 20 years of experience.

Fine-tuning the brine settings and finding the sweet spot will result in reduced snow build-up. Clarey goes on saying, that he noticed that the puck is much less sticky than it used to be. Something their senior teams noticed right away and the officials even wondered if the pucks had been sprayed with something since they don’t see snow sticking to the puck anymore. 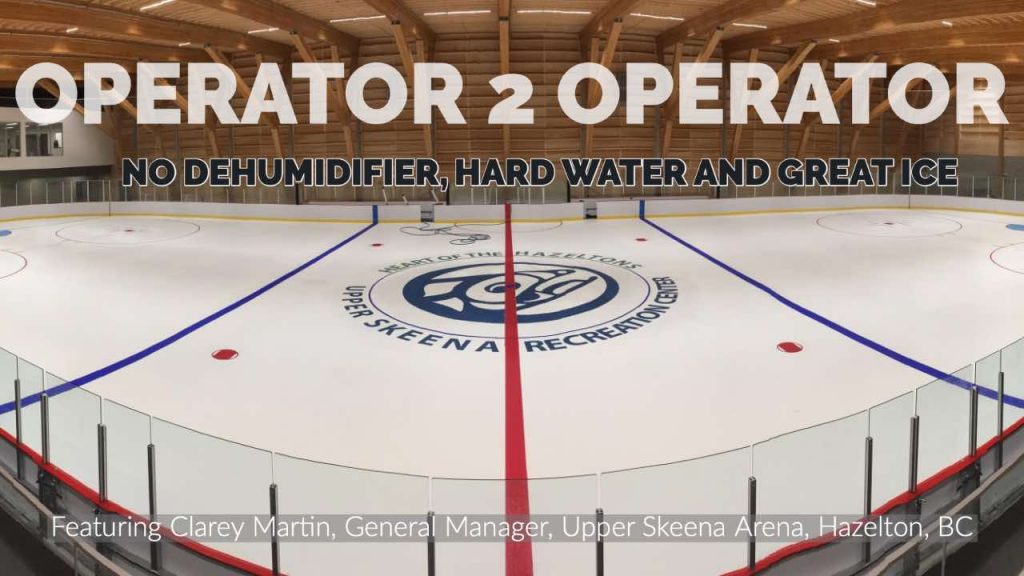 5.) Increases the clarity of your ice making your lines shine brighter

“Just look at that ice,” says Doug Conquergood, Arena Manager of the Servus Community Arena in Bow Island, Alberta.  The ice is showing off the lines beautifully, and one can tell that the ice is slippery, in fact so slippery that the cleats don’t help much. Doug’s ice is kept at an inch and a quarter (3 cm) — and he and his operations team of one take good care of their ice, and their ice resurfacing machine – keeping the blade sharp and the towel clean. 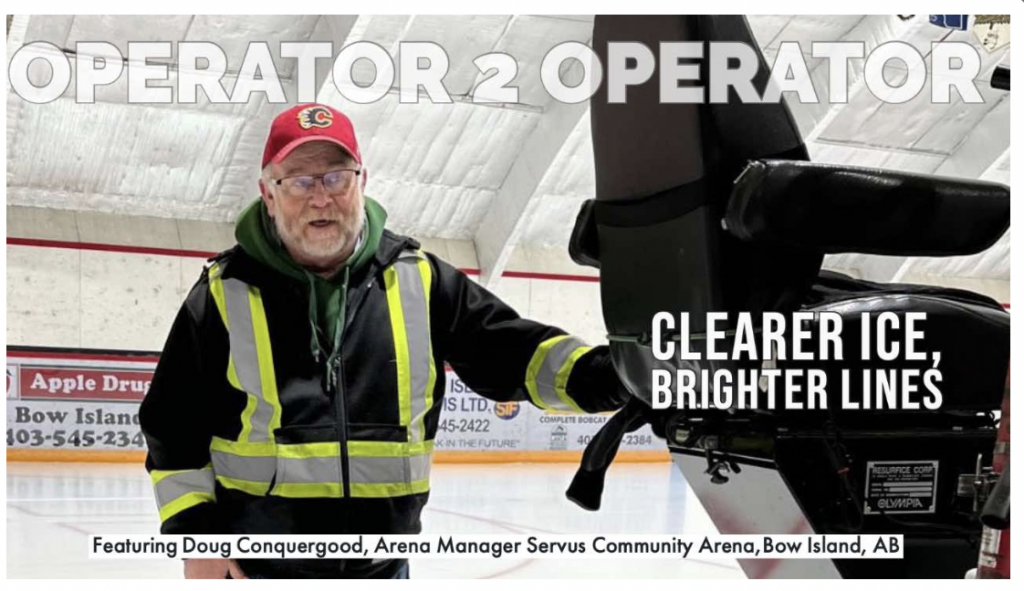 6.) Allows for decommissioning of unneeded equipment

Cam shares that since the REALice system was installed he has been using unheated water to resurface his ice and was able to raise his brine temperature by 4°F. But that’s not all. REALice is letting him keep his ice thinner, resulting in lower maintenance and decommissioning equipment. 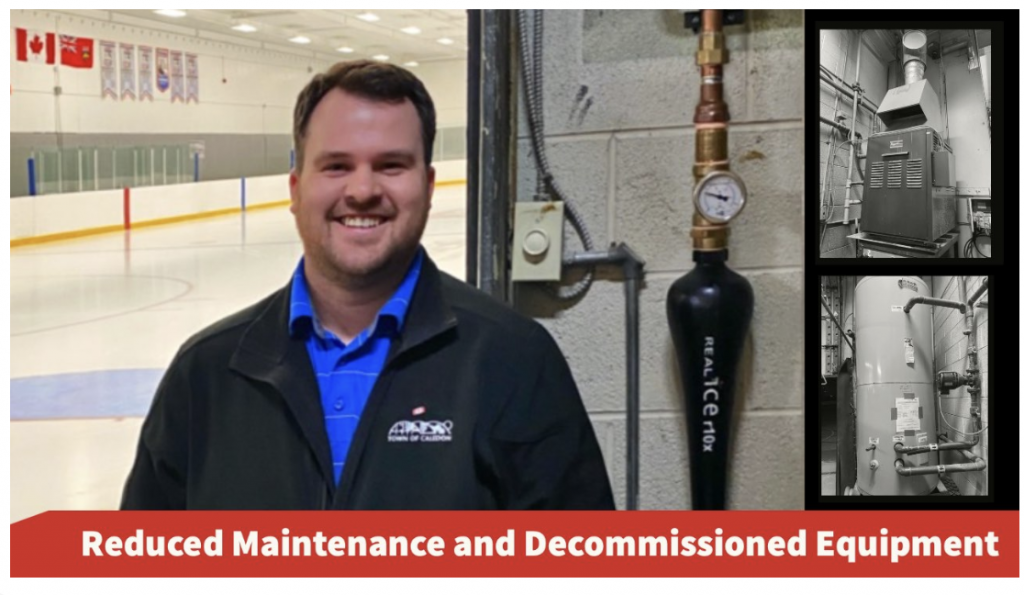 REALice helps crystalize the calcium particles in the water. Soluble forms of calcium such as calcium bicarbonate (CaHCO3)2 are transformed into calcite and aragonite, which do not attach to pipes, nozzles, or other warm surfaces and are also removed. Calcium bicarbonate (CaHCO3)2 in the water is forced to precipitate out in the form of calcite (CaCO3) primarily aragonite crystals which have minimal scaling properties does not precipitate on surfaces. Another advantage is that the treated water also acts upon old limescale deposits, which are reduced and eventually vanish after a period of use.

Garry Breck, Facility Maintenance Manager, Cariboo Memorial Recreation Complex, says: “In Williams Lake, we have very hard and mineralized water and we have found that the ice is as good as before the Real Ice installation if not better. We have also noticed our ice stays much clearer than before.”

Learn more about the effects of REALice on hard water 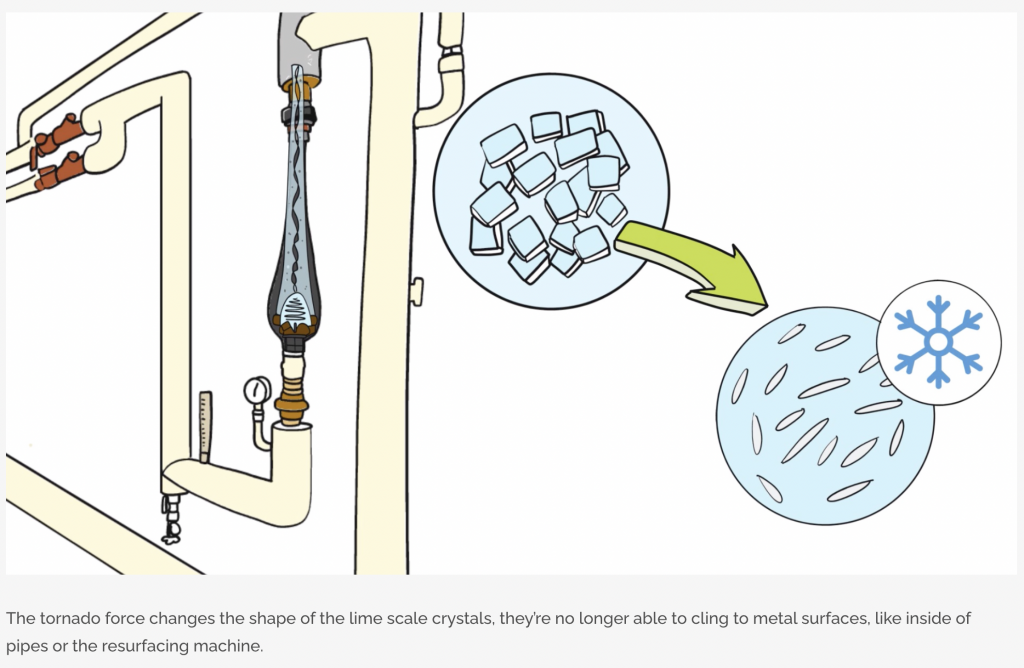 Dagan Doraty and Chrissy Jochmes are impressed with the clean floods they are achieving with the help of the REALice system and noticed that the ice is much clearer, they are putting down less water and less snow is coming off the ice! The ice made with REALice is more resilient and therefore scars less, requiring less water for maintenance. 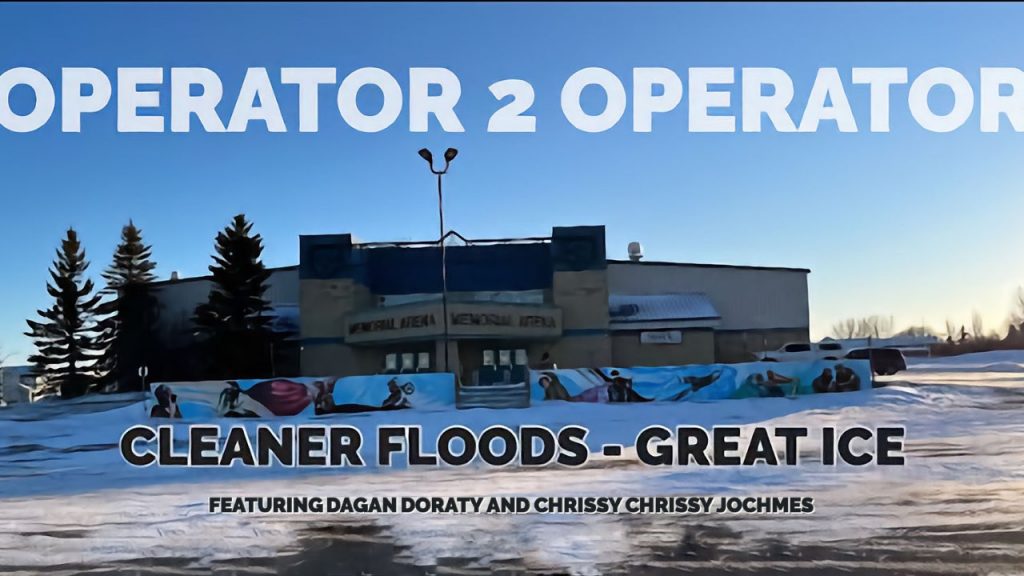 Michael Knight, Supervisor of Arenas for the Sardis Sports Complex in Chilliwack, BC says, shares, how he stopped having spider cracks on his sand floor.  The Twin Rinks in Chilliwack, expanded in 2019 to become the Sardis Sports Complex with a triple pad. Back in 2016, the first REALice system was installed at the Twin Rink with one of the two pads being on a sand floor. Mike and his crew turned down the resurfacing water temperature to 70°F and increased his brine temperature by 3°F and got fantastic ice – with no spider cracks anymore! 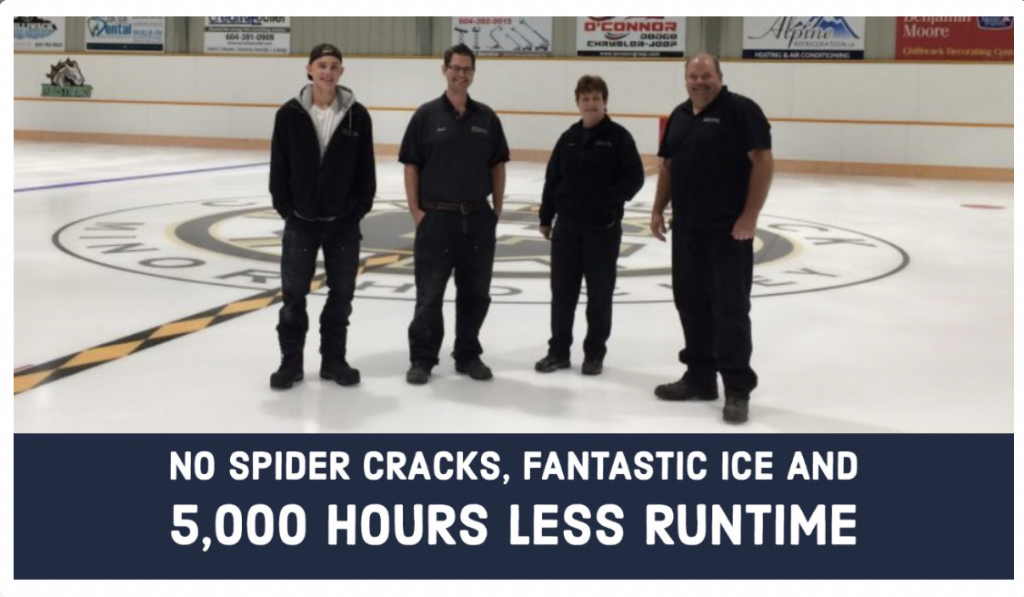 For the 2020-21 season, the East Coast Hockey League (ECHL), a mid-level professional men’s league, awarded its “Best Ice” trophy to the Rapid City Rush, playing out of The Monument in Rapid City, SD – on ice made with REALice. Engineering manager Nathan Kleinschmit, pictured below, says on-ice maintenance was also reduced, which was a blessing with the workout the ice would take with the league’s revised schedule of three games in three days.

Do want to know more? Watch the interview with Nathan Kleinschmit 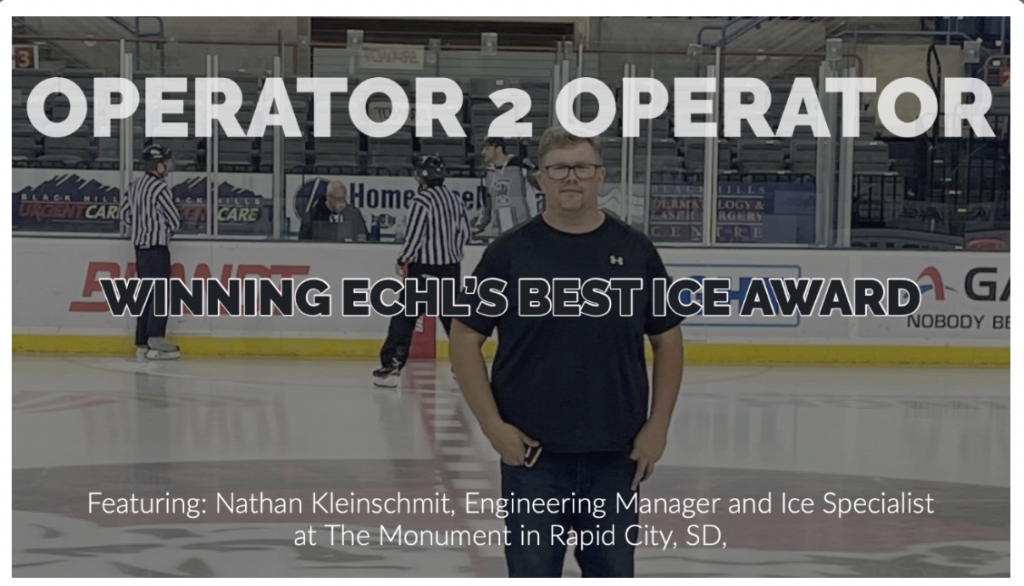 Read more: 20 ways to reduce the cost in your rink