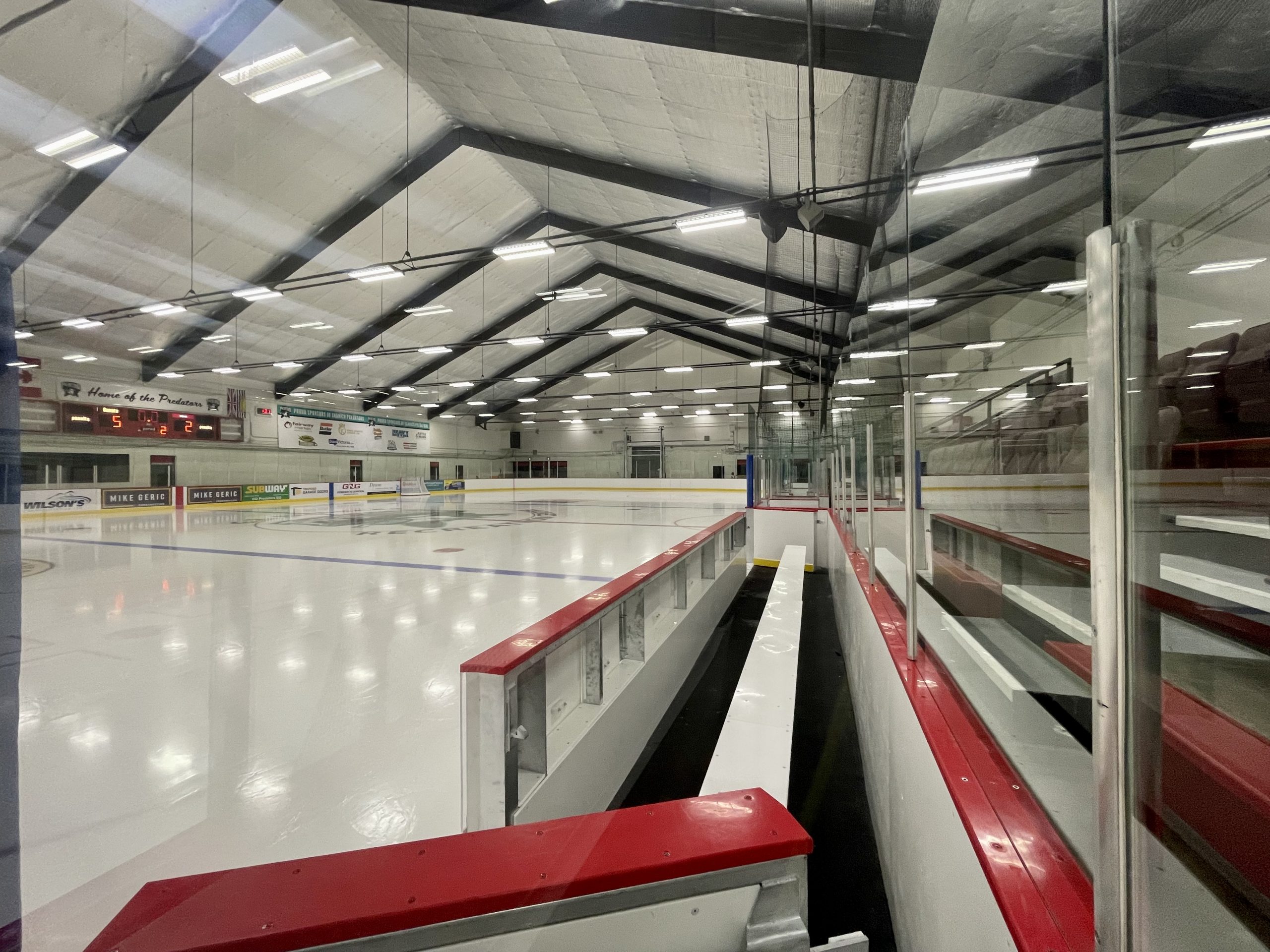 At REALice Canada we are often asked for suggestions to help improve the arena ice maintenance and reduce the costs of running the rink. Of course, with rising natural gas and electricity costs and increasing carbon taxes, cutting the arena’s energy spent is key.

Here is our pick for the top 20  ice rink maintenance measures to reduce costs and improve the ice quality:

The thicker the ice and concrete, the harder it is for the refrigeration plant to maintain the required ice surface temperature. For every additional inch (25.4 mm) of ice, the energy required to maintain the ice surface increases by approximately 10,000 kWh/year. Finding the optimal thickness of the ice layer and the thickness of the concrete slab below is a key factor in cooling efficiency. Ice and concrete act as insulators, preventing heat transfer to the ice rink refrigeration system. If the ice is too thick, it will significantly increase the compressor load and energy costs. The optimal ice thickness is between 1 ¼” and 1 ½. It is important to monitor the ice thickness of the rink to ensure that there is enough ice but not too much. Keep it nice and tidy.

Incorporating an early morning dry shaving routine for your ice resurfacing cuts off the ruts in the ice increases the clarity, and reduces the amount of water used throughout the day. This also helps to maintain the optimal ice thickness (1 ¼” and 1 ½) and therefore reduces the load on the rink’s refrigeration equipment.

3. Resurface the ice rink at a steady pace.

When resurfacing the ice, it is important to drive at the same speed and pay attention to the speed. No operator should slow down or speed up anywhere in the rink when shaving ice and laying down water. It is important not to put down too much water along the boards to prevent the ice from building up too high. Going over creases turn off the water and raise the blade. Once past the crease, turn the water on again and lower the blade. Take your time: For an NHL rink use at 8-10 minutes, for an Olympic size arena 10-12 minutes. Ensure a 5-minute window before the next user group is scheduled to be on the ice.

4. Change ice temperatures depending on usage.

Some arena operators run their ice a bit warmer than others. They have temperature settings for the ice plant when it’s unoccupied, during practices and games. Increasing the set-points reduces the load on the ice plant. This reduces energy consumption. How much energy is actually reduced varies across the country from facility to facility. Some sources suggest up to 2% per 1°F increase. This is a result of the combined effects of conductive, convective, and radiant heat loads on the ice surface. So, the higher the ice temperature, the lower the potential for heat transfer.

5. Remove micro air bubbles from floodwater with a rink de-aerator.

Reduce the water heating costs for the floodwater by 79% – FortisBC ice rink resurfacing efficiency pilot  –  and save 10% – 12% energy from your ice plant by lowering the temperature of the resurfacing water used on the ice pad. Instead of using extremely hot temperatures to remove the air bubbles from the flood water for ice resurfacing, air bubbles can passively be removed through pressure. This treatment of the resurfacing water results in harder, smoother ice that requires less maintenance. De-aerated water has fewer impurities than boiled water and can therefore be frozen at a higher temperature.

Humidity in the ice rink has a big impact on the quality of the ice and on the energy consumed in the ice rink. A high level of humidity provides a rugged surface with a lot of snow production when in contact with the sharp blades of a skate. Arena operators consider factors such as the temperature and moisture outside, the expected event crowd, and what time the game begins. Excessive humidity in the condensing moisture releases a tremendous amount of heat into the ice surface. This heat must be removed by operating the ice rink chiller for longer than would normally be required. Condensation could permeate the building insulation and this reduces its effectiveness, structural steel can start to rust and wood will start to rot, further reducing the integrity of the facility. The resurfacing water that is applied to the ice surface plays a big role. By treating the resurfacing water and using unheated water, instead of extremely hot water, humidity levels can be lowered. Optimal humidity for an ice rink is between 50-55%, this is especially important when you have a large crowd.

An ice sheet in a rink is designed just like a refrigerator, when the dasher boards are open, it allows the heat to enter the ice requiring the rink’s refrigeration equipment to work harder to take that extra heat load off. It also has an impact on the ice and will make it softer. Open doors to the outside have the same effect, but in addition, makes it much harder to control the humidity levels inside the arena. By using fast-opening loading doors the amount of cool air that leaves the arena can be controlled better.

Choose ice surface paints designed to be thermally conductive. This reduces the heat transfer through the ice and helps to conserve energy. Painting the ice with an environmentally friendly, reflective, and thermally conductive white reduces costs for refrigeration by reflecting radiant heat energy away from the skating surface and creates a healthier environment for skaters. White paint reflects light back into the arena whereas dark sand or grey concrete would absorb it. If absorbed it would have to be removed by the chiller system. Reflecting the light back into the rink it reduces the amount and number of lights required to provide adequate illumination, for further energy savings.

10. Keep a sharp blade and change your towel regularly

Make sure the blade on your ice resurfacer is always sharp. This is a standard best practice for ice making. Shave the ice with each ice make, don’t just pick up the snow. Shaving the ice during resurfacing will cut out the ruts and ensure the ice in your rink remains clear. Also, use wash water with each ice make if you have that option on your ice resurfacer. Check the towel. Is it clean or full of rust spots? If you wouldn’t wash your car with it, you shouldn’t have it on your ice. A clean towel makes a big difference to your ice quality.

When left unattended the ice resurfacer could overflow with hot or cold water because the water was not shut off when the machine was full. This wastes water and natural gas (if the water is hot). Installing an automatic water filling system will prevent the resurfacing machine from overflowing. Systems can be programmed for the size of the tank and are equipped with a remote sensor mounted on the resurfacer, a solenoid valve, and a control unit.

LED produces far less heat and better lighting conditions, compared to previous lighting technologies and will keep the ice in the rink harder. With less heat emitted, ice rink chillers won’t have to work as hard.

14. Buy an electric ice resurfacer or convert the existing one to electric.

Electric ice resurfacers eliminate the pollution inside the ice arena in the form of carbon monoxide and nitrogen dioxide. Initial costs are higher than traditional machines but those can be offset over time by lower operating costs. Ice resurfacer electric conversions turn your existing propane or natural gas ice rink resurfacing machine into electric drive.

The need for stored hot water can be decreased substantially by using a rink de-aerator to passively remove the micro air bubbles in the flood water instead of heating and storing the water. This makes a tankless water heater a viable option for any other need of warmer or hot water in and around the fill station for the ice resurfacing machine. Tankless hot water heaters only produce heat when it is being used. When the water is no longer needed, the units are shut off and stop producing hot water.

Nearly 30% of the total refrigeration load in heated rinks is radiated from the arena ceiling. Radiant heat migrates from a warm surface in a rink to a cold surface, the heat load radiates from the ceiling to the ice surface. Reducing the EMs of the arena ceiling has a large impact on the load of the ice rink refrigeration equipment, helps to reduce cost and provide better ice conditions.

With an indoor snowmelt pit, the collected snow from the ice resurfacings is melted without opening the outside doors of the arena and letting the heat in. The refrigeration system runs less. This reduces the electricity costs significantly during the ice melting process.

Ice covers can be expensive, but they are highly effective in reducing indoor ice rink costs and ice maintenance efforts. Covering an ice layer with these blankets take no more than thirty minutes, and they reduce compressor run-time significantly. Many high-value thermal blankets and conversion flooring are made of recycled materials.

19. Recycle water from the snowmelt pit.

The Scott Seamen Sports Arena, M.D. of Foothills #31 in Alberta, Canada has taken their snowmelt pit one step further and installed a system that recycles the ice shavings which are melted within the pit and then treated and stored in an outside retention tank. This water is then put directly back into the Zamboni for the next ice resurfacing. The arena is saving 60% of the water (300,000 gallons out of the previously 500,000 gallons) and $40,000 in hauling fees. Besides using recycled (grey) water for ice resurfacing, it can be used in washroom toilets and urinals and for landscaping and irrigation.

Insulated ceilings and walls play a big role in helping to control the indoor climate of the ice arena regardless of the outdoor climate. Insulate your facility’s walls, floors, windows, roof, and doors. Seal air leaks and insulate water heaters and pipes in unconditioned areas.

Various additional suggestions to improve the overall footprint of an ice arena can be found in the Go Green Framework
from the Arena Guide.