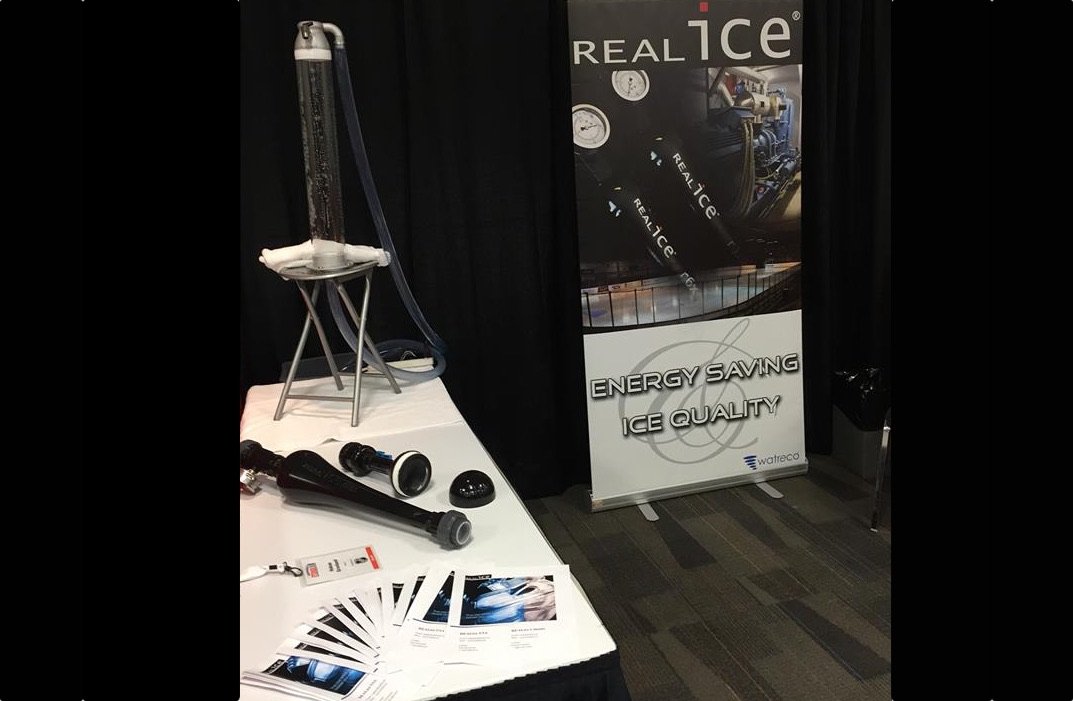 Posted at 11:25h in News, REALice® News by Colleen O'Shea

Luxembourg – Last week, the National Hockey League  (NHL) had meetings at several different venues all over the USA. Columbus, Ohio was where the Facility Operations Managers were meeting, and Håkan Grönlund from Luxembourg-based H2O Vortex S.A. was there, presenting how low energy REALice® technology can make a difference to their ice quality, consistency, bottom line and the environment.

The patented REALice System connects to the water line used for the ice resurfacer and also includes a handheld nozzle that connects to a hose for manual ice building and repairs. As the water passes through REALice, micro-bubbles in the water are pulled into a very low-pressure vortex chamber removing micro bubbles that were present in the water. It’s an environmentally friendly alternative to using extremely hot water, typically heated to a scorching 160°F (71°C) before it’s added to the ice resurfacer to maintain ice.

These micro air bubbles (which you can see the next time you heat up a pan of water on the stove, clinging to the side of the pan) rise to the surface and disappear into the air. As the water gets hotter the solubility of the dissolved air in the water decreases. Water with few micro bubbles makes hard, clear ice. The REALice design removes the micro bubbles without heating the water by creating an extremely low pressure vortex using only the city water pressure.  REALice is maintenance-free and an easy way to shave thousands of dollars off the yearly gas and electric bills.

Grönlund, whose company is the international distributor of REALice, says the typical return on investment (ROI) for a twin pad with one filling station is less than a year for most rinks running year round. And, he points out, it’s good for the environment, reducing the amount of greenhouse gasses arenas are responsible for creating.

The NHL is no stranger to the REALice technology. Since 2010, the NHL has been using REALice for all its outdoor games, some of which have been particularly challenging because of the external warm weather temperatures.

In addition to no longer having to heat the water up to such high temperatures, the ice plant doesn’t need to work so hard to cool it down and freeze it, either. And, because it doesn’t need to remove so much heat, the brine temperature under the ice pad can be moved up a couple of degrees, which is another energy saver.

Although Grönlund is tight-lipped about any forthcoming agreements with the NHL, a few things are certain. With a fistful of NHL ice rinks having been continuously scrutinized this past season by Daniel Craig, the league’s Chief Ice Maker, ice quality and “an even playing field” for all its teams are matters of importance to the NHL.

Earlier this year, Canada’s newsmagazine MacLeans urged arenas to “change their energy-hogging, carbon spewing ways“. Perhaps the NHL, by embracing REALice, will help lead the charge in North America – REALice has been installed in over 350 locations worldwide, with the bulk of those installations in Europe. The arenas used by NHL teams are actively looking for energy saving methods as responsible corporate citizens — and as a way to improve their bottom line. By using REALice to make ice, the NHL will be sending a strong signal to arenas everywhere that modern technology can trump decades of a mentality of using fossil fuels to heat up the water to make ice. The mindset of, ”It’s always been done like this” just isn’t good enough, any more.

REALice is distributed in Canada by SWiCH Services and in the United States by Cypress Ltd. The system is eligible for energy incentives through both gas and electric utilities such as SoCalGas, Southern California Edison, Xcel Energy, Fortis BC, BC Hydro, Efficiency Vermont, State of North Dakota, CenterPoint, Conexxus, and more. REALice is produced in Sweden, is ISO 17025 certified and is made using 3-D printing technology.