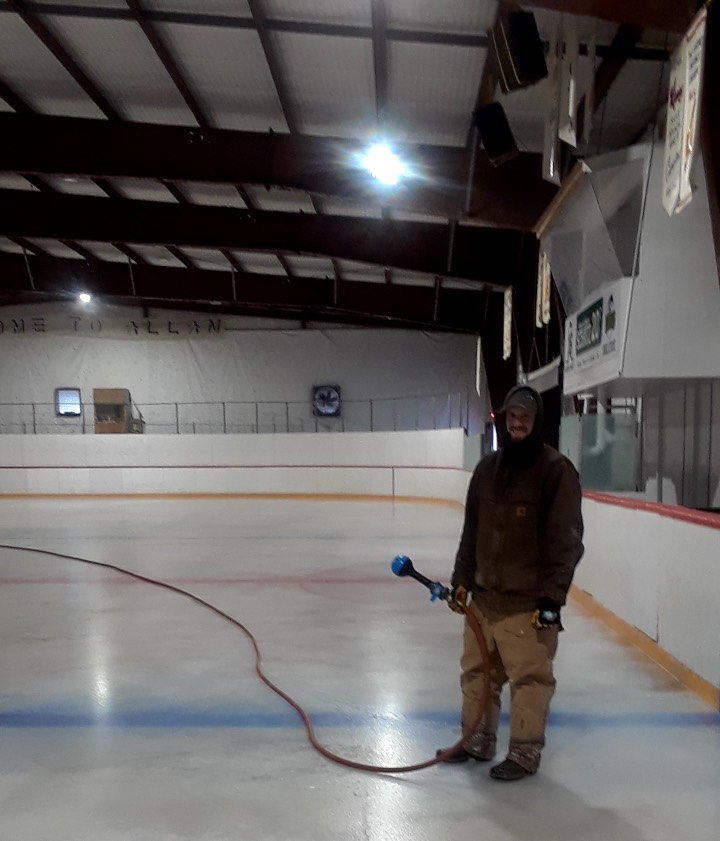 December 15, 2020 – The Town of Allan is the first community in Saskatchewan to use REALice at its arena, the Logan Schatz Memorial Arena. The installation, using pressure instead of temperature to treat the floodwater, is unique for a couple of reasons.

First, Allan’s REALice system is a rental. Instead of purchasing REALice, the Town of Allan decided to rent it for the duration of the shortened ice season in an effort to cut costs. Secondly, after building an initial base with their refrigeration plant on, the Town has shut off its refrigeration plant to save money. Now they’re building natural ice on top of their sand base, using REALice to treat their cold water.

According to the Town’s Recreation Director, Lindsay Nordmarken, they weren’t sure if they would put ice in their arena at all this year because of COVID-19.

“The pandemic has been a “REAL” kick in the pants,” Lindsay says. “Usually we’ll attract teams from Saskatoon to the arena for weekend tournaments, but that’s not happening this season. Ultimately the Town decided with all the restrictions from COVID-19 that the community needed a recreation outlet, and we’re doing that with our indoor ice rink. We decided to go bare-bones, to save as much money as we possibly could, while still being able to provide an outlet for the community. REALice is helping big time by eliminating water heating and electricity costs.”

The Clarity of the Ice is Amazing

Lindsay says the clarity of the ice is amazing.

“It’s amazing! We didn’t use ice paint but there was leftover paint on the sand base. But the REALice ice is so clear, it looks like we’ve painted!” Nordmarken says. “Painting the ice is another expense we decided to do without, and as long as there is no competitive hockey, we’re happy with how it looks now.”

The arena was recently renamed the Logan Schatz Memorial Arena after a young man from the community. Logan, along with 15 others, was killed in the Humboldt Bronco crash on April 6, 2018. Logan, who was 20 when he died, was the Captain of the 2017-18 Bronco’s team. Logan’s memory is being kept alive at the arena where he learned how to skate: a mini stick rink was constructed in the arena, and banners showing all the different teams that Logan played for are on display. There’s also a life-sized picture of Logan across from the mini rink. 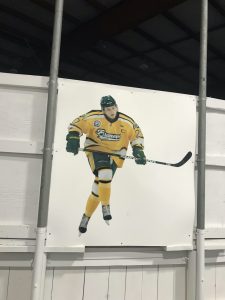 Logan Schatz, Captain of the 2017-18 Humboldt Broncos, was one of the players killed in the bus accident on April 6, 2018. Logan learned to skate in Allan, Saskatchewan.

Florian Gabriel, Managing Director of SWiCH Services Inc., the technology transfer partner of the Swedish technology in Canada, says the Town of Allan’s approach is unusual.

“What Allan is doing is quite unusual in shutting down their refrigeration plant to save money,” Florian says. “But this year has been an unusual year, and sometimes you need to think outside the box in order to get things done. Hats off to Lindsay and the Town’s recreation committee for looking at better ways.”

Florian says that under regular circumstances, REALice would have reduced the arena’s energy spend by nearly 35,000 kWh and 3,400 m3 of natural gas.

“REALice saves in more than not just heating the floodwater to extremely high temperatures,” he says. “It’s taking less heat out of the water to get it to freeze, and most importantly, the warmer brine settings that comes with the treated water that freezes so much quicker. It will make a difference to the run time for this arena’s refrigeration plant when and if they decide to turn the plant back on!”

As for renting the REALice system, Florian says it makes sense.

“Renting the REALice is giving the Town of Allan options. They’ll be able to try it out and see if it’s for them. And when they do decide to buy, we will put a percentage of the rental fees towards the purchase. We realize small municipalities like Allan are strapped for cash and having a program like this gives them an opportunity to move away from traditional hot water floods and the expense it brings them every season.”