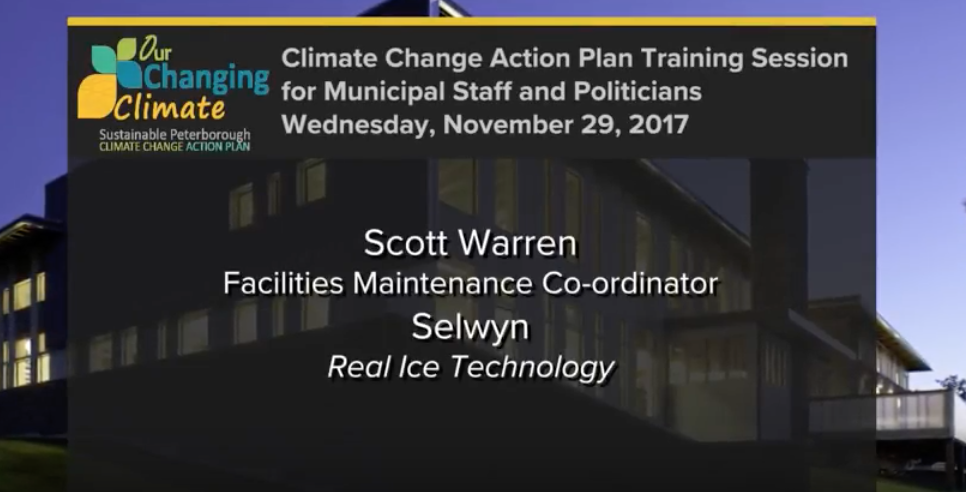 Posted at 23:40h in REALice® News by Colleen O'Shea

Ennismore Arena on Target for 2-Year Financial Payback with REALice

At a recent Climate Change Action Plan meeting, organized by Sustainable Peterborough for municipal staff and politicians in the greater Peterborough, ON area, a presentation was made on how the Township of Selwyn is reducing energy and making good ice at the Ennismore Recreation Centre by using REALice. Scott Warren, the Facilities Maintenance Co-ordinator for the Township, explained that by going to the cold water resurfacing technology, the energy spent for the single pad ice arena has been dramatically reduced, keeping them on track for a 2-year financial payback.

Because of incentives available from SaveONenergy and a second program from Enbridge Gas that was soon to expire, Warren had to move quickly to get municipal funds made available for the purchase. To do so, the township took advantage of sustainability reserves the Township generated from six solar projects.

In addition, Warren and the Township’s arena operators wanted to do their research on the product, so they spoke with a selection of facility operators who are using the system. That included a facility operator in Yellowknife, YK, who had installed REALice to replace a pre-existing system cold water resurfacing system that wasn’t working for them. Warren says that since making the switch to REALice in July 2017, operators at the Yellowknife Mulitplex have had great success making their ice.

The REALice system has no moving parts, doesn’t consume any electrical energy, and does not require chemicals to treat the water to make good ice. In order to see how much energy they would save by using REALice, Warren made use of REALice’s online energy savings calculator and input data about the arena, such as what temperature they were heating their water to, their electrical consumption, their hours of operation, and length of their ice season, all numbers which are unique to the Ennismore Recreation Centre.

The District of Selwyn’s municipal council endorsed the project and provided funding from the sustainability reserve so they could move quickly to install REALice.

Arena operators at the Ennismore Recreation Centre are now running their ice plant 2°F warmer than they did when they used hot water, and in the 60 days after REALice was installed they saved 27.5% on Natural Gas consumption compared to 2016. Their utility provider, Enbridge Gas, told them that it was approximately 4°C colder during the same period as compared to 2016, but in spite of this, they are consuming less gas. Additionally, their hydro consumption was reduced by ~ 13% in the 60 days after installation. These findings lined up well with the REALice energy savings estimate.

The bottom line is they are very pleased with the results so far and it looks like REALice will help them meet or beat the estimated two-year payback.

Warren invites anyone who wants to visit the Ennismore Recreation Centre to make the trip, take a tour and talk with him and the Township’s arena operators about the system.

“The proof is in the pudding,” he says. “At the end of the day, an arena operator wants to make good quality ice. And they want NO feedback — or good feedback — from user groups. If you can achieve all that AND save energy, it’s a win all around,” Warren says.